Skip to main content
COVID-19: All children in our care and our team are safe.

The smiles and charm of homeless children in Nepal mask the ugly realities of their struggles to survive in one of our planet’s most underdeveloped, impoverished countries. Government social services for the poor, abandoned, physically impaired and sick are almost non-existent, especially for the throwaway, homeless children who are too helpless, too frightened and too ignorant to seek help from any source. Kathmandu and other large towns are filled with child beggars and physically damaged children haunting temples and squatter settlements, struggling from day-to-day for survival. The purpose of our efforts becomes a passionate force when we are able to rescue these children from their harrowing backgrounds and give them a chance at a decent life.

My journeys to Nepal began with the shared desire of most ardent mountain hikers - to experience the rugged drama of the towering, ice-layered Himalayas and the simple, mountain villages scattered along ancient walking trails. The most profound effect of my explorations, however, was my abrupt awakening to the wretched level of poverty in the country, so impacting that my life turned a sharp corner and without reflection my next twenty-three years, my cause and my joys, became children of Nepal; the throwaways, the damaged and the forgotten. Beginning with one child, and with the continued discovery of other endangered children, a program began that grew to support and serve hundreds of children. It was the hands-on, one-on-one, personal involvement with so many of the individual children, however, that became such an inherent part of my life and maintained my enthusiasm and commitment, through hard times occasionally, and most definitely through countless waves of good times and emotional highs. As my time in the presence of these children grew, so did my admiration of their generous and sacrificing natures.

Friend and honorary father, his love, care and support for Nepal’s most destitute children will continue

It is with a heavy heart that we report that Virtue's Children Nepal (VCN) founder Loren "Allan" Aistrope passed into spirit in October 7, 2018 after a long and serious illness.

Allan will long be remembered for his lifelong dedication to the least fortunate and most vulnerable children of Nepal.

So great was his love that Allan continued to travel to Kathmandu to supervise VCN programs even as his health failed.

VCN will honor and carry on Allan's legacy under the leadership of Director Rubin Nepali, a graduate of the Paropakar Boys' Orphanage and VCN beneficiary who is now a successful Silicon Valley engineer.

We will continue to strive toward improving the lives of the Nepali children through programs we monitor and nurture toward self-reliance. VCN wants every child to have the right to survival, stability and education as well as a happy, healthy and safe childhood.

We ask for your continued support of VCN in Allan's memory. All tax deductible donations will be managed and distributed virtually 100 percent to our beneficiaries in Nepal. We will keep you updated via our website and newsletter.

Known as "Allan dai" (older brother) to his many Nepalese friends, Allan personified the old saying that you go to Nepal for the mountains – but you go back for the people.

A much-sought-after art director for magazines and advertising agencies, Allan put his career on hold in 1984 for what he thought would be a once-in-a-lifetime visit to Nepal.

He volunteered to teach English at Paropakar, Nepal's oldest orphanage, and soon found he had become a father figure to the boys. For many, this was the first genuine, close friendship with an adult in their lives.

"Shooting the breeze, back-patting, dispensing of advice, dressing wounds and table tennis (the boys are killers) were claiming a fair portion of our time together," Allan once wrote.

He came home to the U.S. – and lasted all of three months before he realized where his true home was.

Allan returned to Kathmandu and began working with others to rescue children off the street, establish residential homes for orphans, arrange scholarships, set up treatment programs for physically impaired children, even a music program for blind children in Pokhara.

In 2003 he founded VCN, an all-volunteer organization with a board of directors who each have their own special connection to Nepal. In recognition of his unstinting work in Nepal, the Kansas-based Heartspring Organization awarded Allan its prestigious Heartspring Award in 2009.

Right up until his passing on Oct. 7, 2018, Allan worked stoically to ensure that his beloved beneficiaries in Nepal would be well cared for after he was no longer there.

He anointed a director of VCN who is well familiar with the programs and the people who carry them out in Nepal. He inspired life-long supporters of VCN and helped see to it that the Paropakar girls could attend college after leaving the orphanage if they so choose.

He left VCN in the able and committed hands of the its Board, which is determined to continue VCN's support for the Nepali children he loved so much 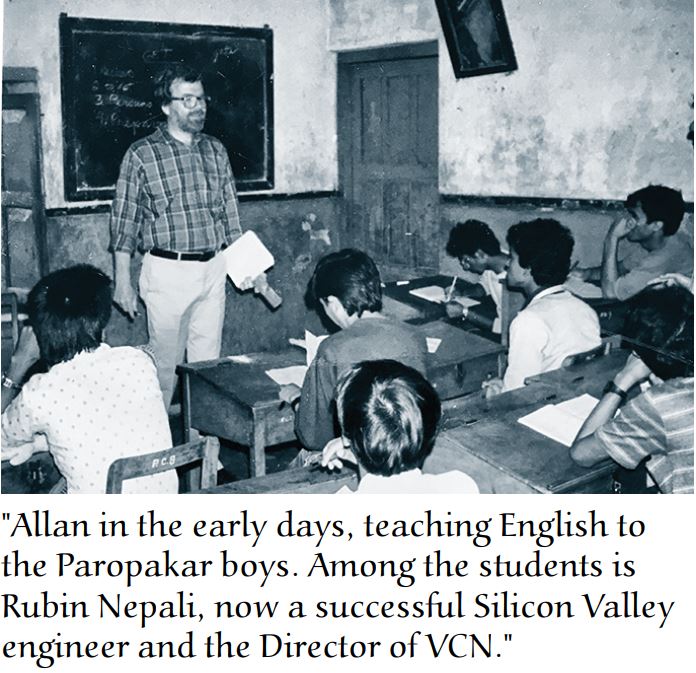